The number of banks and credit unions that service the marijuana industry grew again in the third quarter of 2019, according to a federal report.

As of June 30, there were 553 banks and 162 credit unions that submitted documents indicating that they are providing financial services to state-legal cannabis businesses. That’s up from 493 and 140, respectively, in the previous quarter ending March 30.

While marijuana remains a federally controlled substance and accepting cannabis businesses as clients is largely viewed as risky within the financial sector, the increase reflects a growing willingness to take that chance as lawmakers work to resolve the marijuana banking issue. 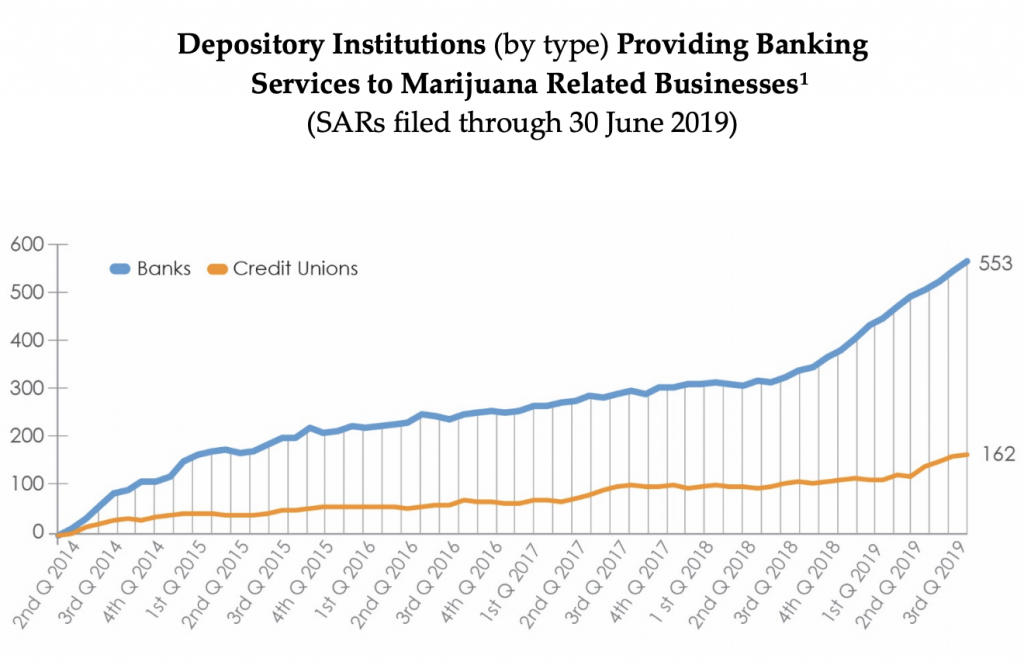 Just before the end of the second quarter in March, the House Financial Services Committee approved the Secure and Fair Enforcement (SAFE) Banking Act, a bipartisan bill that would protect banks that service cannabis firms from being penalized by federal regulators. It’s possible that the development—along with expectations that the legislation would advance further—emboldened banks and credit unions to accommodate the industry.

The full House did vote in favor of the banking bill last month, sending it to the Senate. Rep. Ed Perlmutter (D-CO), sponsor of the legislation, has emphasized the need to provide these financial services to the industry in order to increase transparency and mitigate the risks associated with operating on a largely cash-only basis.

But Perlmutter is also focused on ensuring that hemp and CBD businesses have access to financial services. While the crop and its derivatives were federally legalized under the 2018 Farm Bill, there’s still some confusion that’s led banks to deny their services to the industry.

In an extension of remarks the congressman made on the House floor last month, he urged the Treasury Department to provide guidance for hemp and CBD businesses that are involved in lawful activities.

“While the SAFE Banking Act focuses on harmonizing federal and state banking laws regarding serving legitimate cannabis businesses and their service providers, there are still several issues where the federal government could provide more clarity,” Perlmutter said. “The Department of Treasury and its regulatory agencies should issue guidance on behalf of all federally licensed businesses engaging in, or considering engaging in, the legal cannabis trade, or hemp and CBD  trade, with respect to their engagement in a legal business.”

The Financial Crimes Enforcement Network, or FinCEN, released this latest update on cannabis banking in August. The numbers are based on an analysis of suspicious activity reports, or SARS, that financial institutions are required to file in accordance with 2014 cannabis banking guidance issued under the Obama administration.

“As of 30 June 2019, FinCEN has received a total of 87,249 SARs using the key phrases associated with [marijuana related businesses],” FinCEN wrote.

The agency also broke down the types of SARs that banks and credit unions reported for cannabis businesses. 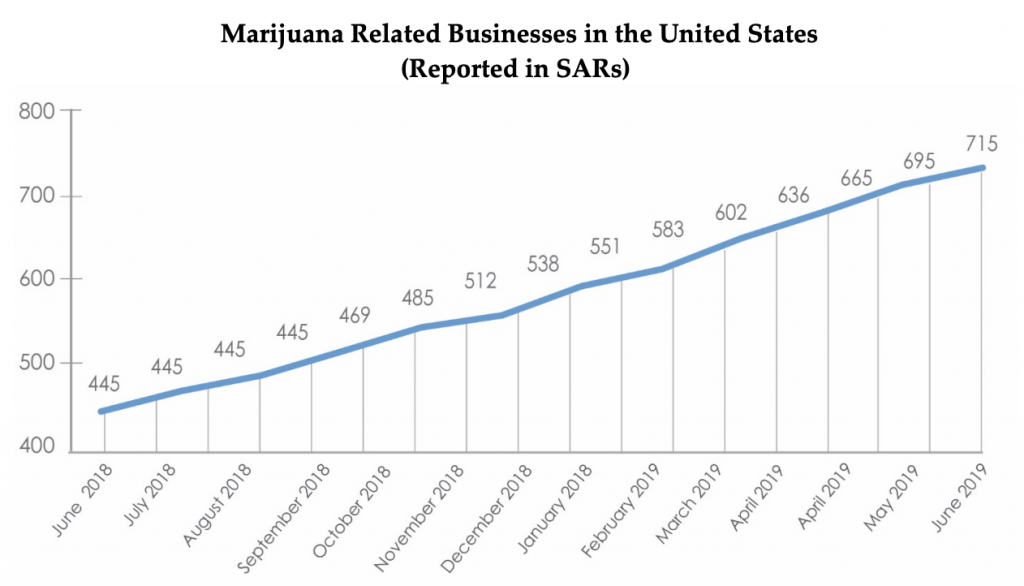 The overwhelming majority (68,378) were described as “marijuana limited,” which refers to marijuana firms that seem to be operating in compliance with state law, thus meeting the agency’s standard for being serviceable under existing federal guidelines.

About 6,900 fit the definition of “marijuana priority,” a term that means the business “may raise one or more of the red flags” under federal guidelines or they “may not be fully compliant with the appropriate state’s regulations” and so they’d be under investigation.

There were approximately 22,000 SARS marked as “marijuana termination,” defined as a cannabis business that has violated at least one federal enforcement priority or state regulation and so “the financial institution has decided to terminate its relationship with” the business.